In the wake of last year’s devastating California fire season, many burned-out areas across our home state are bursting with an unprecedented riot of vibrant scarlet/fuchsia blossoms this spring—Pedicularis, aka lousewort (or more obsoletely, “Indian warrior” plant). At Five Flavors Herbs, we have been selectively harvesting Pedicularis densiflora on private lands (with owner consent) from the same stands for 25 years, and its famed ability to relieve musculoskeletal discomfort makes it one of the key ingredients in our limited-release formulas Du Huo Ji Sheng Tang Plus and Pain in the ... tinctures. This near legendary genus of medicinal plant is much prized in Western natural therapeutics, but it has also been somewhat shrouded in mystery even to those who use it.

Michael Moore introduced the herb to Western herbal audiences, and its use has been propagated by his writings, teachings, and especially by his students. Moore’s guidance has allowed many Western clinical herbalists to use various Pedicularis species confidently and to great effect, but the sources of his information remain largely unknown. He includes no citations in his texts, and there are few references to Pedicularis elsewhere in the ethnobotanical literature or North America and Europe.

Recently, however, the Western herbalism community has ventured down a new path to understanding Pedicularis through the classical and modern observations of Traditional Chinese Medicine, thanks in large part to the work of Dr. Thomas Avery Garran, PhD, an internationally recognized herbalist, author, ecological agronomist, and our dear friend and colleague. Thomas was my first mentor in herbal medicine-making, botanical identification, wildcrafting, and herbal therapeutics, and his decades of scholarly exploration into the use of Western herbs in East Asian herbal practice is fundamental to the mission of Five Flavors Herbs.

While translating Chinese materia medica in search of more information about some of Western herbalism’s most valued medicinals, Thomas unearthed perspectives on Pedicularis that substantiated and mirrored its use in the West, opening up a whole new trove of potential insights to explore. His work exemplifies the immense value of studying botanical use across cultures, and we hope his example will inspire others to do the same. Thomas has generously allowed us to share some of his Pedicularis reflections and experiences in this post, and we encourage our readers to watch for his expertise in other posts to come! ~Introduction by Benjamin Zappin, LAc 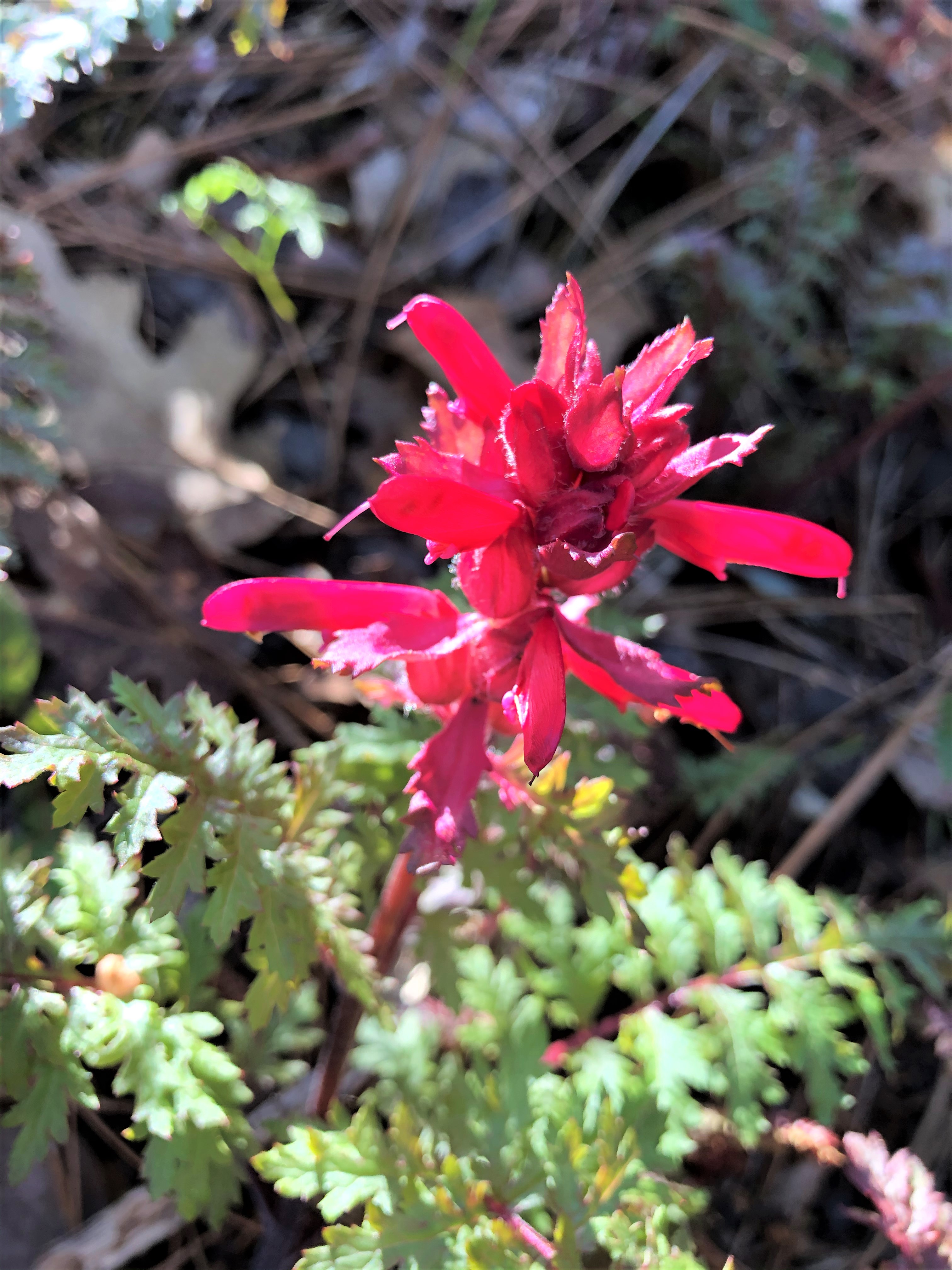 Anyone who has been introduced to one of the species from the Pedicularis genus has likely looked upon it with some measure of amazement. Those from the Western United States are likely familiar with the early spring red carpet offered by P. densiflora in the low to middle elevations of California and southern Oregon, or have may noted the obvious resemblance to an elephant’s head in the flower of the high-elevation species P. groenlandica, found throughout much of the Sierra Nevada, Cascade, and Rocky Mountain ranges. These also happen to be two of the more commonly employed species by herbalists in those bioregions.

Pedicularis offers both profound beauty and profound therapeutic benefits. The crimson carpet of P. densiflora tickles our sight sense, while providing an early spring pollen and nectar source to many of our flying insect friends, which in turn feed our flying feathered friends, and so on. A pivotal link in this ecological niche has also given us a medicine that grants the same calming and physically relaxing effects offered by sitting in the splendor of its spring plumage in the tranquility of an open pine forest and a warm spring day. 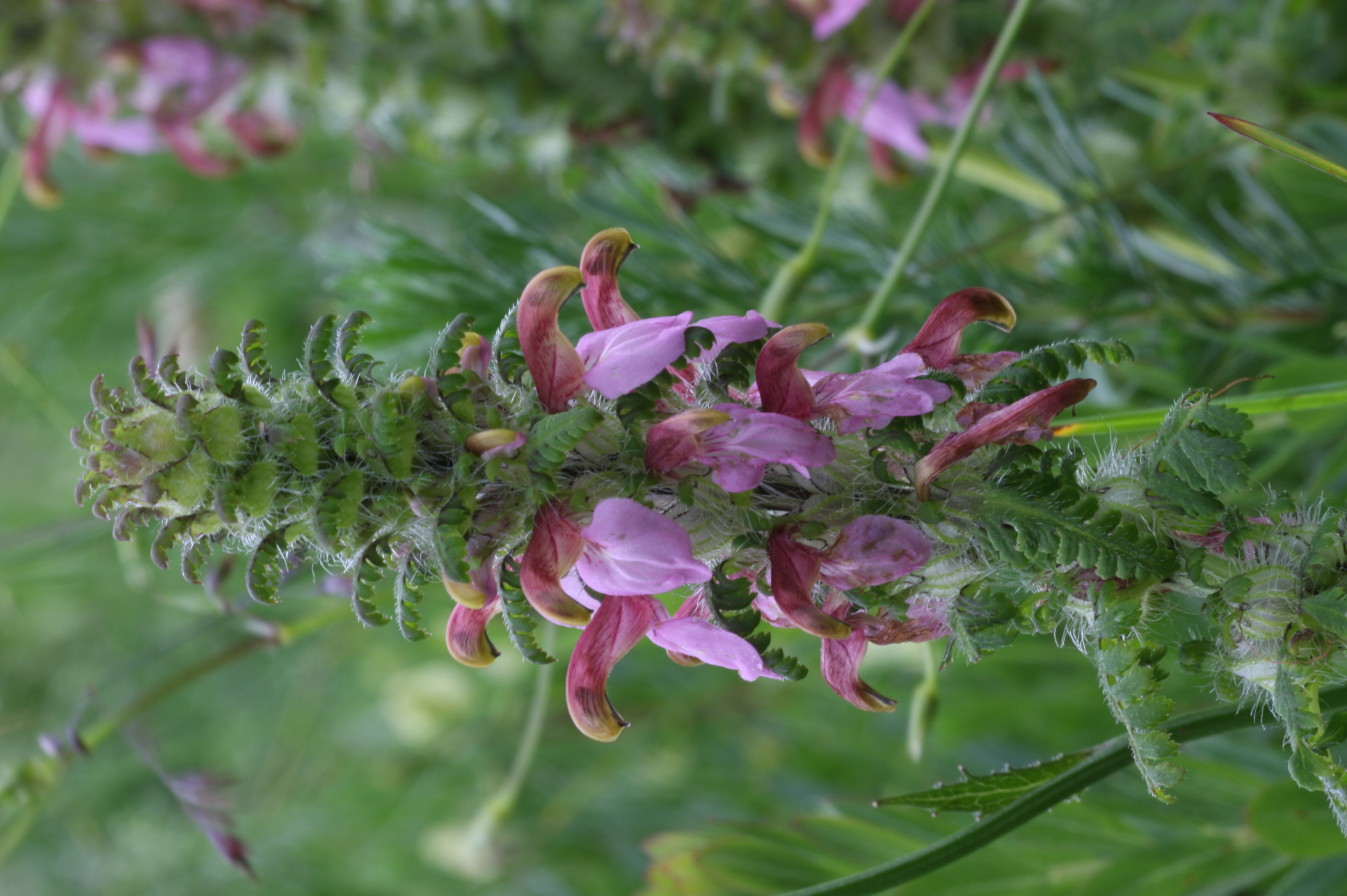 A mysterious genus with significant diversity, Pedicularis is relatively large (comprised of about 600 species). It was originally placed in the Scrophulariaceae family but has now been moved to the Orobanchaceae family, in large part due to the fact that, like others in the latter family, it has a hemi-parasitic relationship with plants that grow around it. The genus is best represented in the mountains of southwestern China but is found throughout the country. There are 352 species found in China, and 271 of them are endemic, making nearly half of all species in the world endemic to China. After my trip to Qinghai and Northeastern Sichuan in the summer of 2009, I realized that even the largest stands of American species of Pedicularis are tiny compared to some of what I saw on this trip.

In comparison, North America is home to 36 recorded species of Pedicularis (though if you take into account subspecies, some of which are likely distinct species that have yet to be delineated, there are actually 69). All but two of these species are present only in the western and northern parts of the United States and into Canada; only one species is found in parts of the southwestern United States ( P. canadensis). Several Pedicularis species are used medicinally and have been most notably described by the late Michael Moore in his book Medicinal Plants of the Pacific West, and elsewhere. My own Pedicularis monographs can be found in my second text, Western Herbs in Chinese Medicine: Methodology & Materia Medica.

North American species are mostly known for their muscle relaxing and calming properties, as presented by Moore in the mid-1990s. Most herbalists find the tincture an effective means of preparations of these herbs. The fresh juice preserved with a minimum of 20% alcohol is another effective method of preparation. I have found the decoction to be as or more effective, particularly when looking to extract the yin-nourishing aspects of P. semibarbata (and perhaps other species as well). Other species used in North America are P. groenlandica, P. racemose, P. attollens, and P. densiflora. 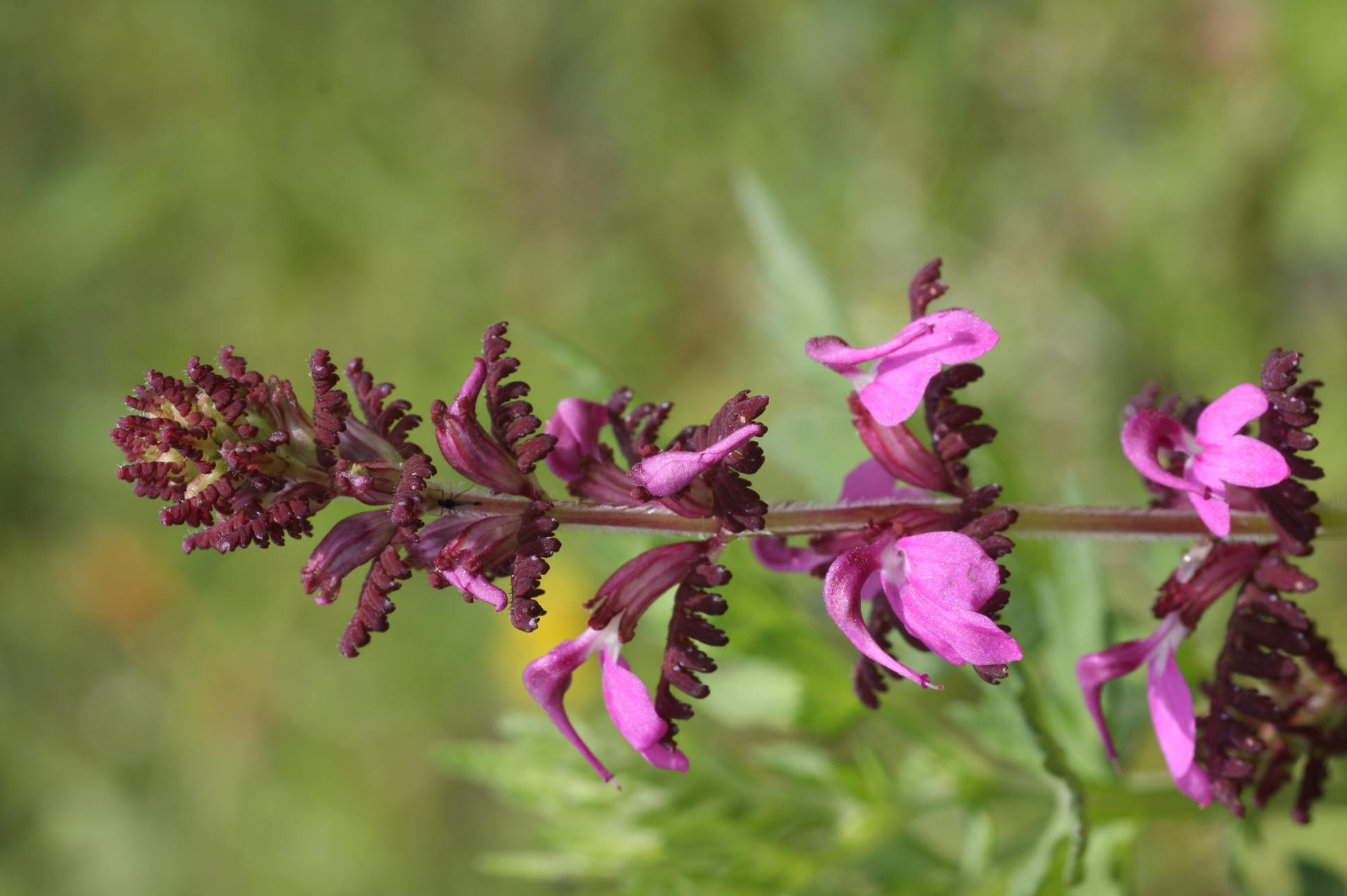 Pedicularis has a very long history of use in China. Known as maxianhao (馬先蒿) in Chinese*, according to the Shennong Bencao Jing (circa 200 CE), this herb is said to be good for addressing wind-damp impediment (i.e., joint pain, but not necessarily only joint pain), vaginal discharge, and inability to get pregnant. The Grand Dictionary of Chinese Medicinals (Zhongyao Da Cidian 中藥大辭典 - 2009), a compendium of over 5,000 medicinal substances used in China, contains monographs for only seven of the more than 300 species. Four of these species are listed under the same heading, taibaishen (太白参), indicating that they may be used essentially in the same way. This group includes P. davidii (dawei maxianhao 大衛馬先蒿), P. decora (meiguan maxianhao 美觀馬先蒿), P. dunniana (dengshi maxianhao 鄧氏馬先蒿),and P. rudis (cuye maxianhao 粗野馬先蒿). All these species are found in the central and western provinces of Shanxin and Sichuan and occur at elevations above 1,700 meters, with P. davidii and P. dunniana extending their range to 3,500 and 3,700 meters, respectively.

The four species are said to be sweet, slightly bitter, and warm, with a small amount of toxicity. They enrich yin and supplement the Kidney, boost qi, and fortify the Spleen. They are used for dual vacuity of the Spleen and kidney; steaming bone tidal heat; joint pain’ and lack of thirst. The herb is given in a decoction at 9 to 15 gram dosage range, however, it can be dosed at 30 to 60 grams in formula. The Supplement to the Compendium of Materia Medica (Bencao Gang Mu Shi Yi 本草綱目拾遺 - 1765) states that eating too much Pedicularis will cause vomiting, suggesting that the herb was sometimes eaten. The Materia Medica of Shanxi Province (Shanxi Zhongcaoyao 陝西中草藥 - 1972) recommends, “for steaming bone tidal heat and joint pain, stew 120 to 250 grams of the herb with pork, divide, and eat” (the text does not say how much pork, or how to divide it). However, this does show that it was, and perhaps still is, used as a medicinal food, and perhaps this is where the caution noted above originates.

The herb that is cited as the original plant from the Shennong Bencao Jing is P. resupinata. This species is common in grasslands and along forest edges throughout much of the eastern and northeastern part of China. It is a rather tall Pedicularis, growing between 30 and 70 centimeters tall. The Grand Dictionary of Chinese Medicinals states that it is bitter and level, expels wind-dampness, disinhibits urine and frees strangury, and can be used to kill parasites. It is used to treat wind-dampness impediment pain, stone strangury, inhibited urination, white vaginal discharge, and abscesses and sores. Dosage is 6 to 9 grams, and 6 grams at a time can be pounded to a powder to be applied externally. 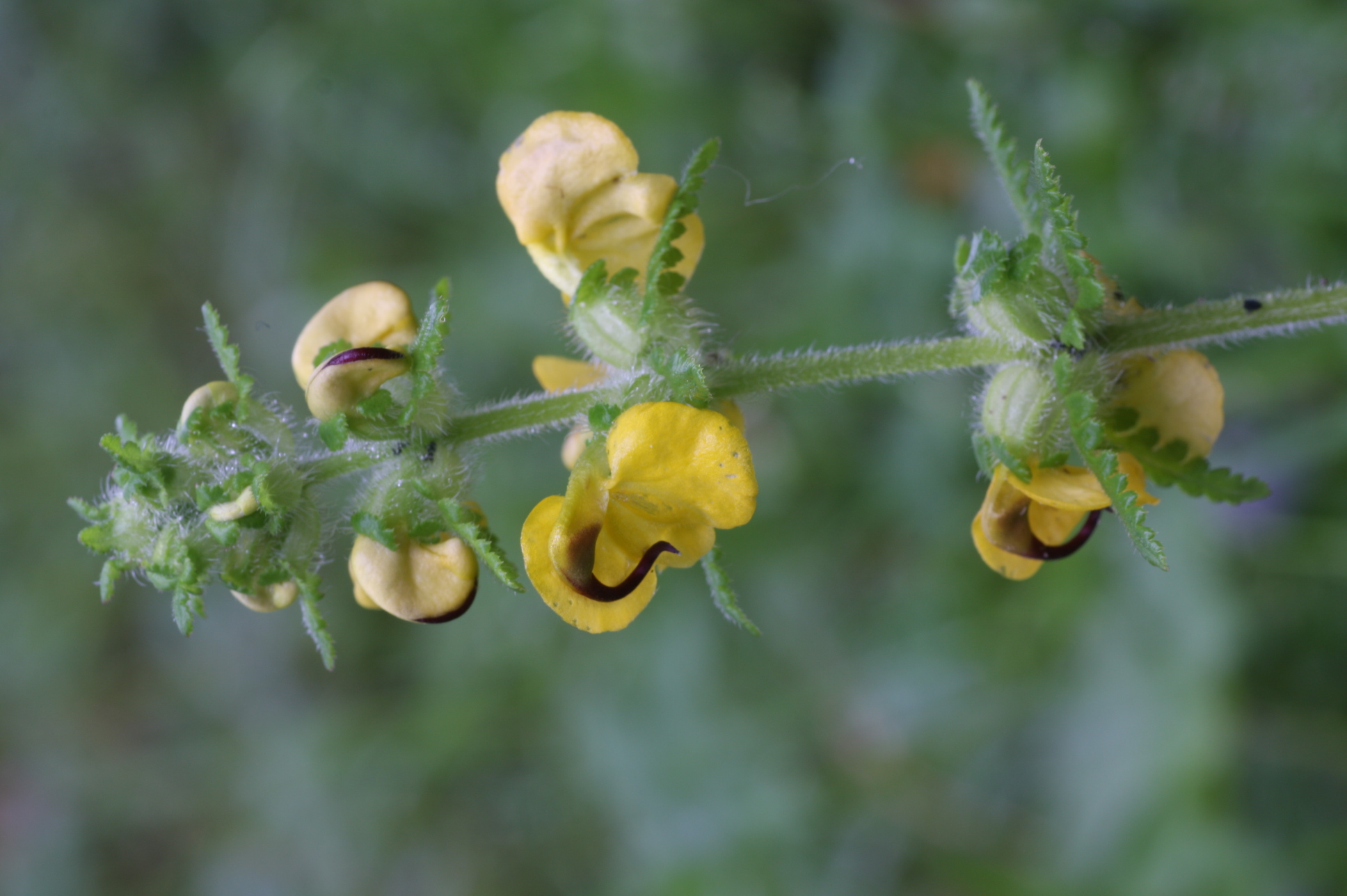 In the United States, the medicinally used species occupy a fairly limited ecosystem niche. P. densiflora, a species common in low to middle elevations throughout much of California and southern Oregon, can sometimes be seen turning the copper tuff of a pine-manzanita ecosystem into a blanket of crimson in the early spring. However, these ecosystems have been and continue to be threatened by development and other human activity. The other primary species are all mid- to high-elevation species, intrinsically limiting where they can grow aside from habitat encroachment. Although high-elevation P. semibarbata and mid- to high-elevation P. racemosa (parrot’s beak, or leafy lousewort) are found growing in open coniferous forests, P. groenlandica (elephant’s head) and P. attollens (little elephant’s head) are both high-elevation species that are partial to the moisture of damp meadows, bogs, and stream-sides.

Like most medicinal plants, due to the fragility of Pedicularis’s preferred ecosystems, cultivation efforts will be required to ensure continued access to their beauty, medicinal properties, and the benefits they provide to their native habitats. However, these efforts are likely to be challenged by a dearth of foundational information. For example, we know almost nothing about the hemi-parasitic nature of these species, such as what species they prefer to grow alongside. Sprague (1962) suggests that P. densiflora only parasitizes woody species (though he does not specify which ones), whereas Purcell (1974) states that the species is facultative (i.e. does not require a host). Owing to significant advancements in technique and technology since the publication of these early papers, we can expect new inquiries to yield far more precise and useful information. Some preliminary work has been done in China on cultivation, but it will require translation and careful examination to determine which techniques might best suit a cultivation project here in the US. We have a lot of work to do!

Written by Thomas Avery Garran, PhD: Thomas is an herbalist, author, translator, and scholar who has been studying plant medicine for over 30 years. He holds a master's degree in Oriental Medicine from Pacific College of Oriental Medicine and a PhD in Chinese Materia Medica Studies from the China Academy of Chinese Medical Sciences in Beijing, China where he currently lives with his wonderful wife and their cute dog. Thomas is an advisor to and has written for the American Herbal Pharmacopoeia and is the Founder and Editor of Passiflora Press.


*Although there are over 300 species in China, every species is named after the plant (or plants) in the Shen Nong Bencao Jing: maxianhao (which is also the name of the genus). The TCM naming system for this species is to add descriptive words before maxianhao—for example, P. trichomata becomes 鬚毛馬先蒿, xumao maxiancao(literally, "bearded maxiancao," alluding to a morphological trait of the plant), and P. batangensis becomes 巴塘馬先蒿, batang maxianhao(after the area to which it is native, Batang, Sichuan province in the southwest of China). Like most genera, there are also some species that incorporate botanists’ names in place of more useful descriptive information.

Purcell (1974) citation [Purcell, J. (1974). Influences of Host and Environment on the Distribution and Reproductive Success of Pedicularis densiflora. Research Paper for Bio. 178 taught by Dr. Harold Mooney.] via https://web.stanford.edu/dept/JRBP/plants/PDF/Cor...