Many traditional medicinal systems—including Ayurveda, Unani-Tib, and ancient European medicine—have recognized a link between how different ingredients taste and how they affect the body. Here at Five Flavors Herbs, we approach flavor from the perspective of Traditional Chinese Medicine (TCM) to inform our health-supporting formulations and recommendations. In many of our  proprietary herbal tinctures, we incorporate energetically compatible Western botanicals with classical Chinese formula structures, and flavor plays an important role in integrating these traditions.

The five flavors and their correlating five elements were first documented in China over 2000 years ago in "The Yellow Emperor’s Classic of Medicine." This foundational text details a sophisticated system for balancing the body that would evolve over time into the modern practice of TCM. Its principles hold that when the five phases are in equilibrium, health and wellness prevail, but when a phase becomes imbalanced, illness may enter the organs and channels of the body. Consuming or avoiding foods from different flavor categories is one way we can promote harmony (or cause dissonance) among our bodily energies.

The organs in TCM loosely correlate to modern human anatomy, but they also have additional functions and meanings in traditional practice. Similarly, while TCM flavors share the names of the different tastes we perceive on our palate (bitter, sour, salty, pungent, and sweet), in the Chinese methodology, each flavor also signals a food’s therapeutic effect upon the body’s systems. The botanical world gives us a full palette of flavors for supporting health. Many herbs encompass multiple flavors (and thus, multiple medicinal actions) especially when combined into formulas. With the skillful application of the five flavors to balance the phases and the corresponding organs and channels, the body is able to return to harmony and health. 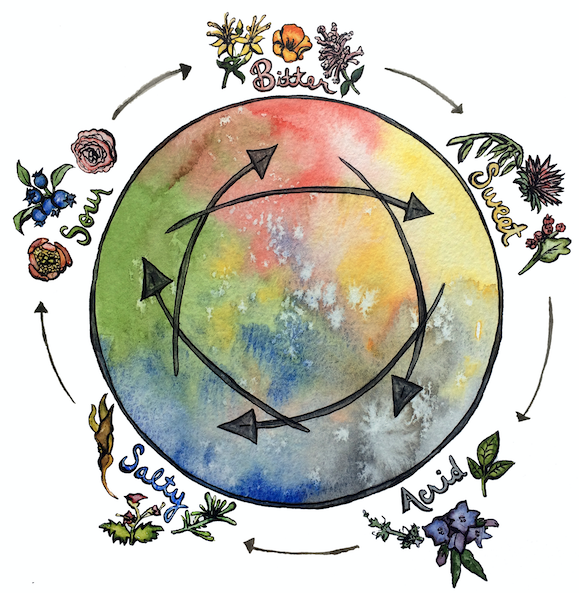 What Are the Five Flavors of TCM?

Bitter is the flavor of Fire. It drains downward, dries, and guides energy to the Heart. Humans tend to have an aversion to very bitter-tasting foods as a product of evolution—bitter flavors tend to warn us of potentially toxic substances, so our ancestors learned to avoid them. Bitterness is a common profile of herbs that are less in the realm of foods as fuel and more on the spectrum of potent medicinals. Alkaloids, glycosides, and flavonoids, which are often bitter, help support the circulatory and nervous system.

Gentiana scabra is a well-known and well-studied bitter herb that has been found to demonstrate inhibitory, antibiotic-like effects (also similar to antibiotics, this cold, bitter herb can have a negative impact on digestion with prolonged use). Coptis is another bitter herb that drains dampness and guides qi to the Heart and Stomach, and it brings harmony to the Fire element by sedating excess heat and resolving constrained toxins that can damage the Blood and Heart. A related bitter Western herb—Oregon grape root—also contains berberines and is applied for supporting the digestive and immune systems. The bitter flavor of Oregon grape is used in Five Flavors Herbs' G.I. Feel Better Tincture for digestion in conjunction with other herbs to optimize digestive function. 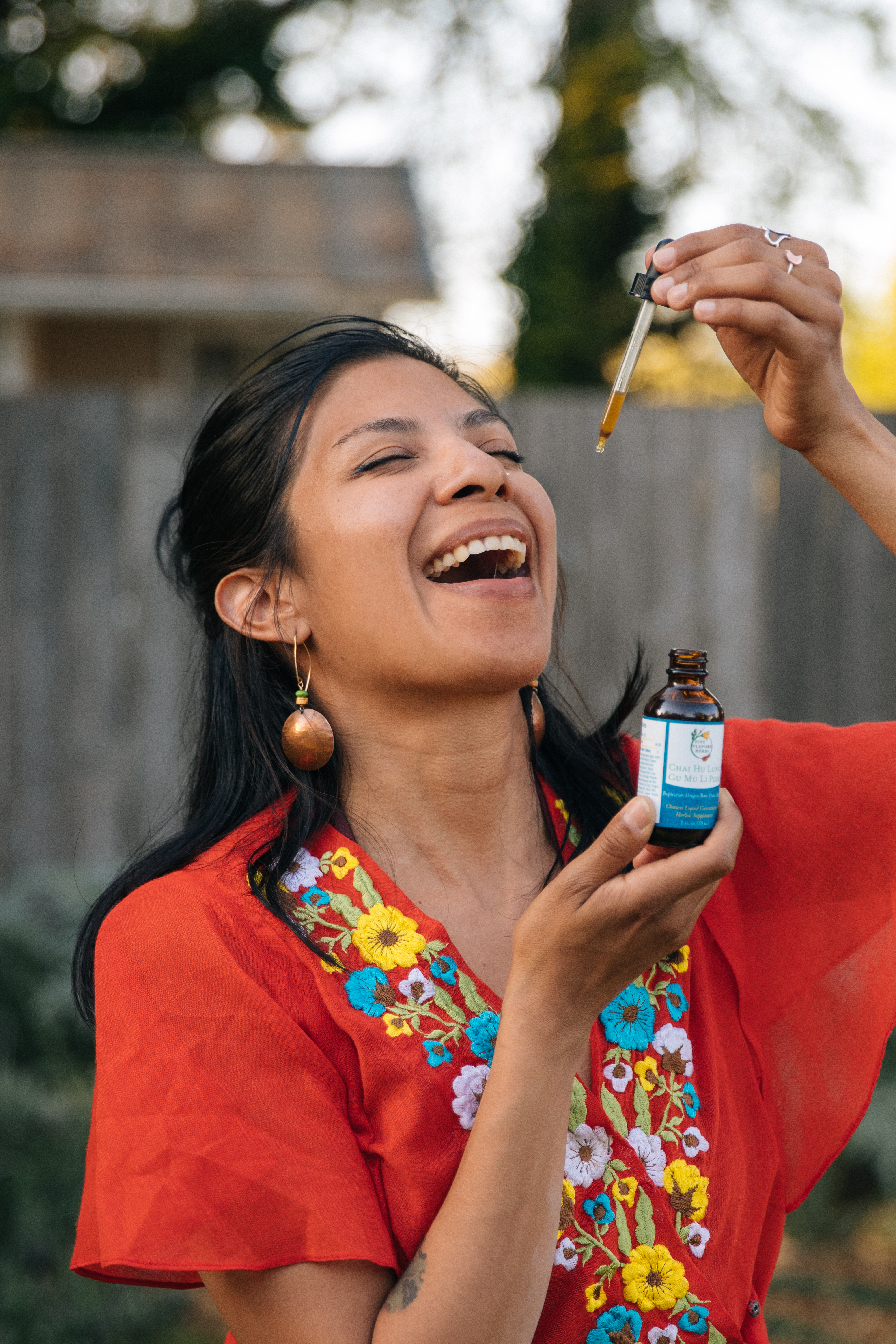 Sweet is the flavor of Earth. The sweet taste tonifies, harmonizes, moistens, contains Fire, and guides qi to the Spleen. Sweetness as referenced in classical Chinese texts described the flavor of grains (such as rice and millet) and meats, rather than the simple sugars we find in modern foods. Sweet is gentle, nourishing, and suitable for most everyone.

Children especially desire naturally sweet foods as they continue to strengthen their digestive systems. Their affinity for sweet flavors is also a built-in mechanism to protect them from harsh or poisonous foods that can cause harm to their young developing bodies. Most tonic herbs, such as licorice, astragalus, and jujube dates, will have a flavor profile that includes sweetness. Sweet herbs and traditional formulations such as Gui Pi Tang may facilitate concentration, alleviate mental restlessness, and support a restful sleep.

Acrid is the flavor of Metal. It disperses and moves accumulations of fluids like Blood, can act as a diaphoretic, and guides qi to the Lungs. Acrid can also be described as pungent or spicy, as it can have a burning or numbing effect. Acrid is commonly characterized as both a taste and a smell because of the impact it has on the nose, which happens to be the sense organ of the Metal element. Acridity is utilized to disperse congested mucous in the nose, which is why we include acrid herbs in our Clear Passage tincture for the sinuses and our Respiratory Recoup tincture for the Lungs. Acrid also helps the body vent out harmful influences.

Acrid herbs are essential for alleviating physical discomfort of the muscles and skeleton from injury or overuse (as they do in our Pain in the… Tincture for occasional soreness) or to soothe discomfort from Blood stagnation (as in our Full Moon Tincture with herbs for menstrual cramps). The acridity of rosemary brings improved circulation to the brain—hence our inclusion of it in our Clarity Tincture for focus and increased alertness. Other examples of acrid herbs are peppermint, cinnamon, bupleurum, peony, Sichuan pepper, and ginger.

Salty is the taste of Water. It purges, softens accumulations, and guides qi to the Kidneys. Animal products are usually considered salty and supplementary to the Kidneys. They make up a large quantity of the herbs in the materia medica that supplement Kidney essence or Kidney yang. In this way, the salty taste can increase yang in the body, balancing the yin nature of the water element. We can see the purgative qualities of the salty taste in the mineral mirabilite (Glauber's salt) and its ability to soften nodules through kelp and oyster shell.

Sour is the taste of Wood. It contains the Wood element's natural tendency to move up and out, allowing it to astringe abnormal leakage of fluids and energy and guide qi to the Liver. The Liver plays a significant role in the body, but it can be exhausted and become “dried out,” either through overwork or undernourishment. The sour taste can help preserve and augment the Liver, thus nourishing the Blood and softening tendons and ligaments in the process.

You can harness the stabilizing and nourishing actions of Sour in herbs like peony root and dogwood fruit. Schisandra berry (also known as "five flavor berry") is a prime botanical that represents the restraining effect of the sour taste in its ability to prevent leakage of Lung qi and Kidney essence, inhibit sweating, and contain the Heart qi to calm the spirit. You can enjoy schisandra’s rejuvenating properties in concert with other nutritive, adaptogenic herbs in our Sustainable Energy Tincture. 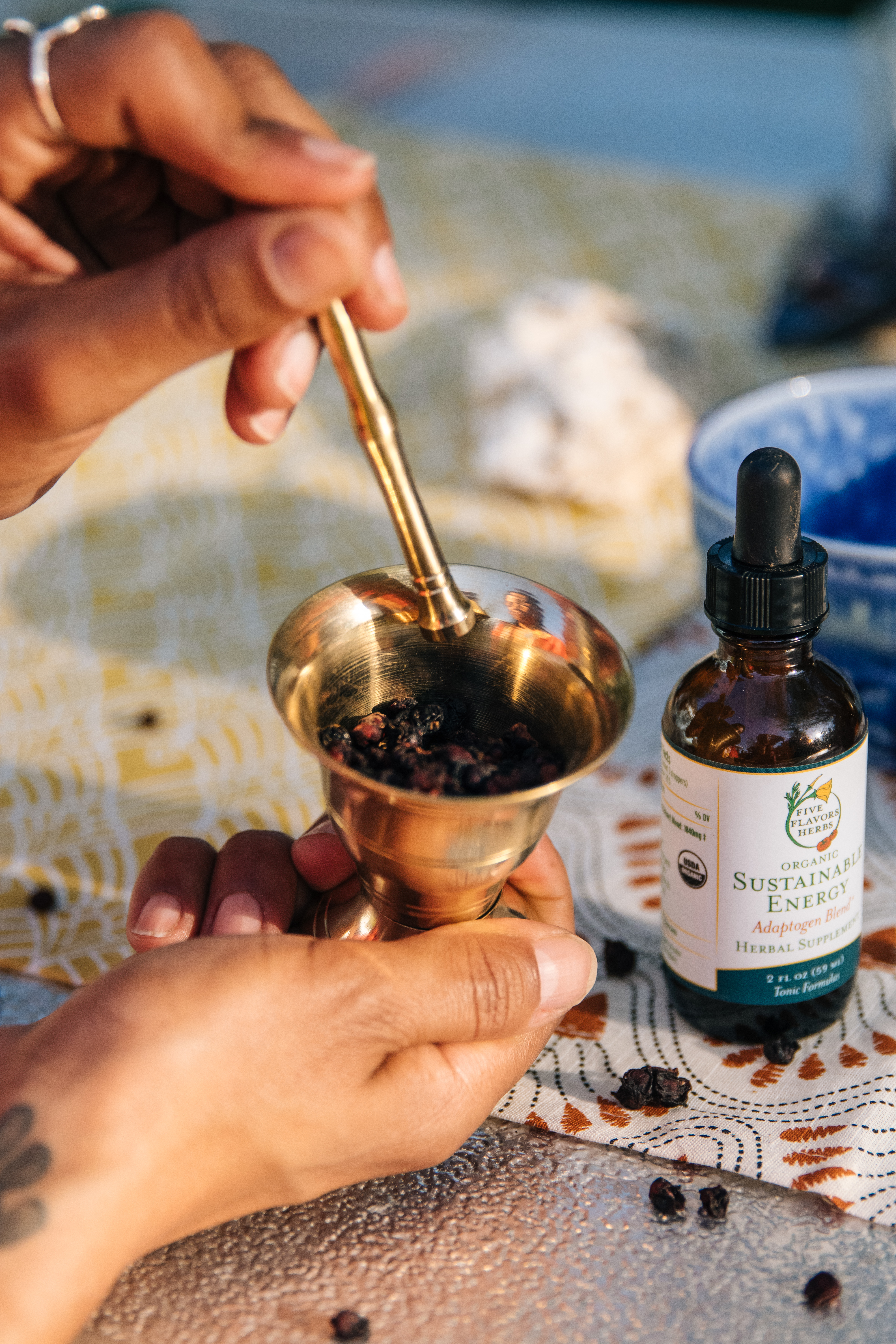 PUT THE FIVE FLAVORS TO WORK FOR YOUR HEALTH:
SHOP OUR HERBAL TINCTURES 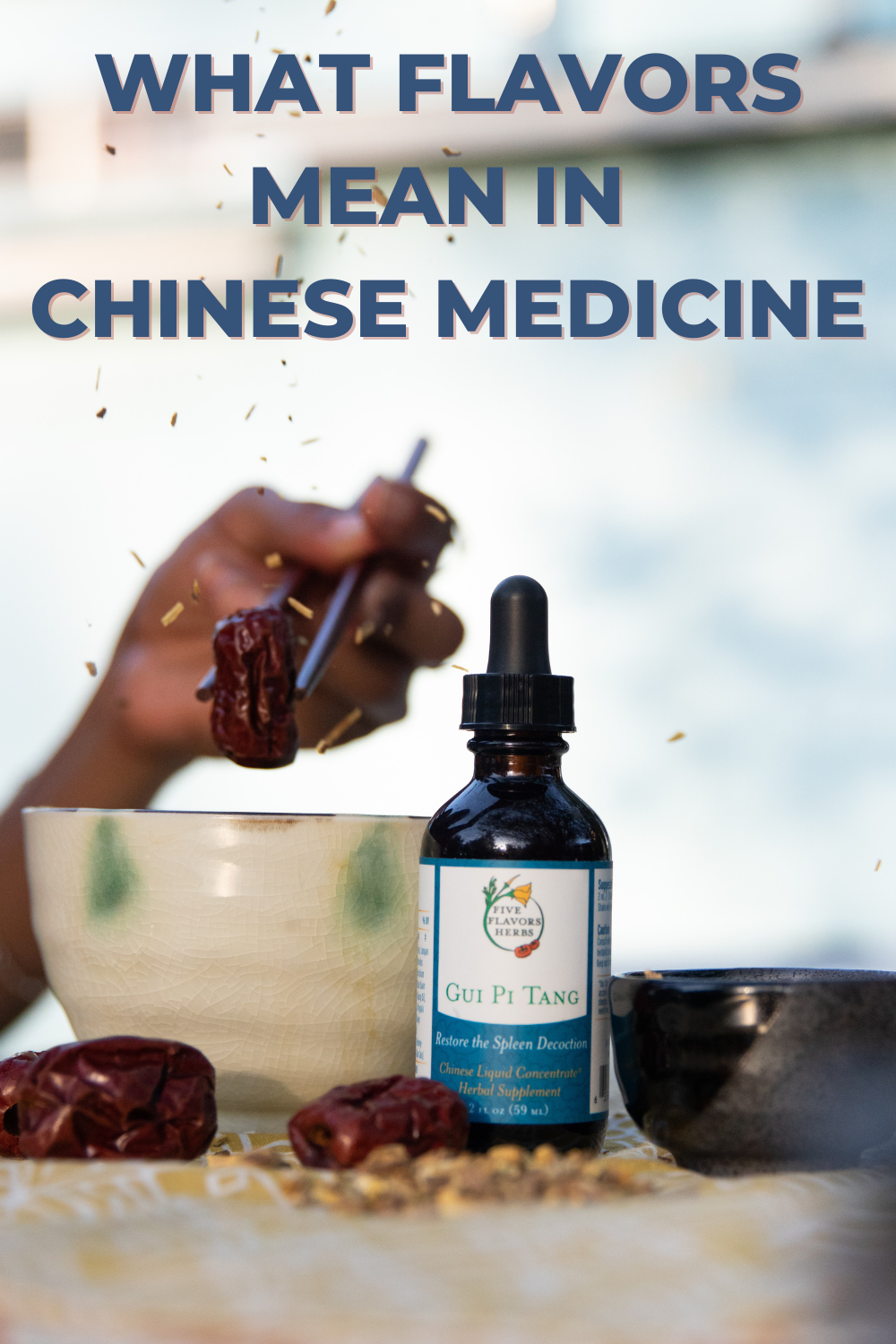 Written by Ingrid Bauer, MD, MS and Benjamin Zappin, LAc: With experience that bridges Western and Eastern medicine, Ingrid brings rigorous scientific knowledge to Five Flavors Herbs. A graduate of the UC Berkeley/UCSF Joint Medical Program and the American School of Herbalism in Santa Cruz, California, Ingrid integrates plant-based medicine into mainstream healthcare. She is passionate about bringing holistic care to people from all walks of life. Her master's research focused on Latino health beliefs and traditional medicine at a bilingual clinic in Oakland, California, and she teaches workshops about herbal medicine at conferences and schools. Five Flavors Herbs co-founder, Benjamin, is one of the Bay Area's most respected and knowledgeable herbalists and a licensed acupuncturist. With over 20 years of experience, Benjamin synthesizes his deep knowledge of Chinese and Western herbal medicine with modern medical perspectives to create effective herbal formulas and treat patients. He serves patients through Paeonia Integrative Medicine.