Spring is one of the finest times of year to spend outdoors, taking in the verdance of new life unfurling and feeling the energizing effects of longer days. Along with seasonal delights like warmer temperatures and fleeting bursts of beautiful flowers (many of which can be used as medicine), we also experience a less celebrated phenomenon—the plant world's reproductive explosion of grass and tree pollen. Unfortunately, many of us face allergies and/or congestion during this period of plant procreation, with results ranging from mildly unpleasant and annoying to considerably impairing. Fortunately, medical modalities such as Traditional Chinese Medicine offer tools for making pollen season more bearable.

What Are Seasonal Allergies?

While some people suffer allergy symptoms year-round and have difficulty identifying the trigger(s), others have allergies to one or two specific things (like that tree blooming outside of your window) during certain times of year (like spring). “Hay fever,” formally known as “allergic rhinitis,” represents one of four major types of “allergies” (a type 1 hypersensitivity reaction, in this case). It is related to asthma and eczema, which are considered “atopic” conditions and often run in families.

Hay fever is characterized by nasal congestion, itchy eyes, and sneezing, and it may include scratchy or raw throat, cough, irritability, and fatigue. It is commonly triggered by environmental allergens like hay (no surprise there!), as well as other grasses, pollen, pet dander, dust, and/or molds. 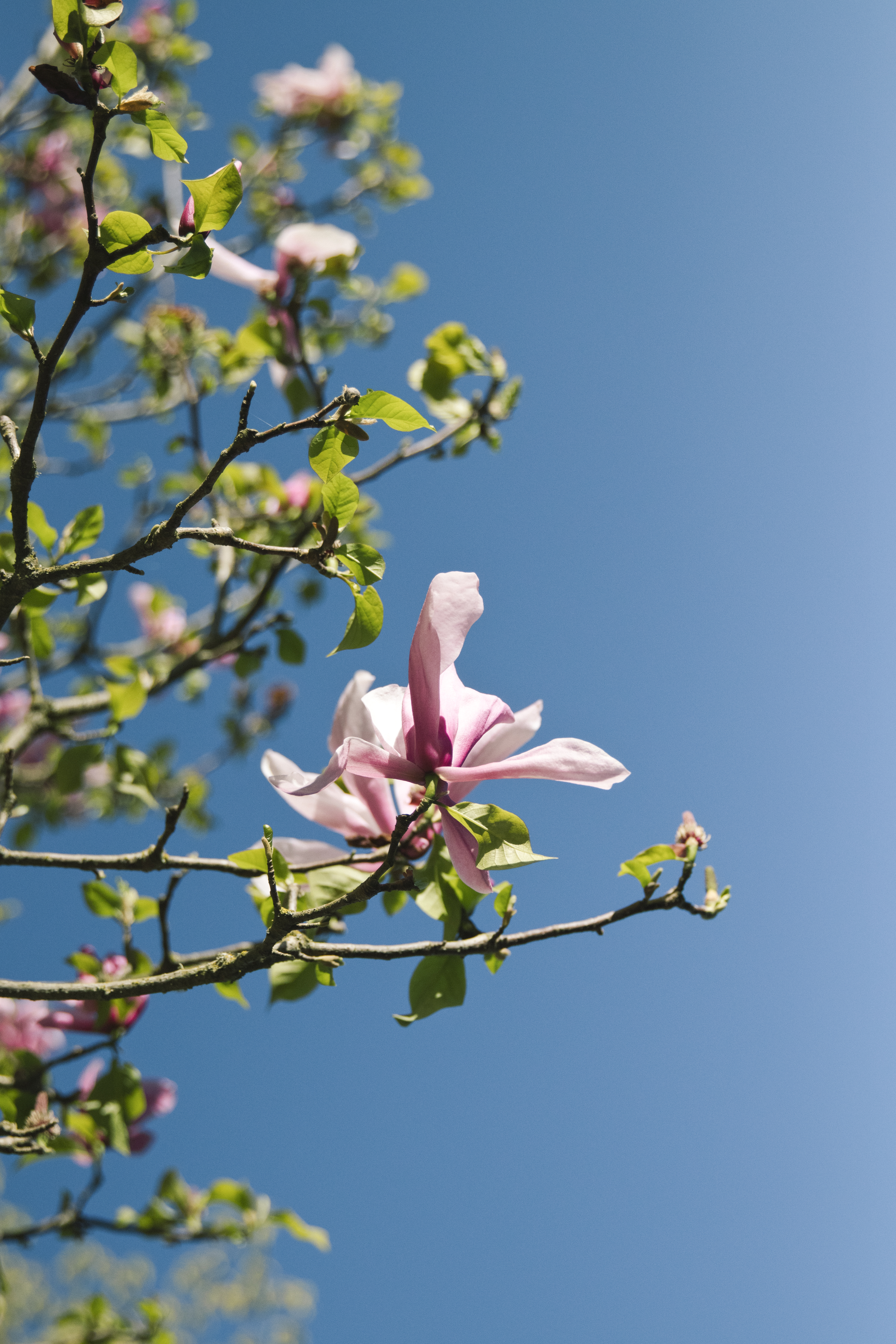 Exactly why certain individuals react poorly to different allergenic proteins is unclear, though genetics and environment most certainly play a role. What we do know is how the allergic response plays out once it has been triggered.

When you breathe in something your body recognizes as an allergen, such as pollen, the immune cells lining your respiratory tract perceive it as foreign and produce antibodies of the type immunoglobulin E (IgE, for short). When the body is exposed to the allergen the first time, those IgE antibodies coat the surface of mast cells, which are specialized white blood cells that line the respiratory tract.

From this point on, any exposure to the allergen alerts the IgE antibodies to activate mast cells, telling them to release a host of inflammatory mediators. The most famous of these is histamine, and others include trypase, heparin, leukotrienes, and prostaglandins. This flood of histamine leads to vasodilation (opening of blood vessels) in the nasal passages, and as these tissues swell, congestion, sneezing, and itching follow. Eventually, especially in individuals with severe allergies, more immune cells are recruited to set up a long-lasting inflammatory response, causing sinus pressure and headaches, ear fullness, and often brain fog, fatigue, and irritability. 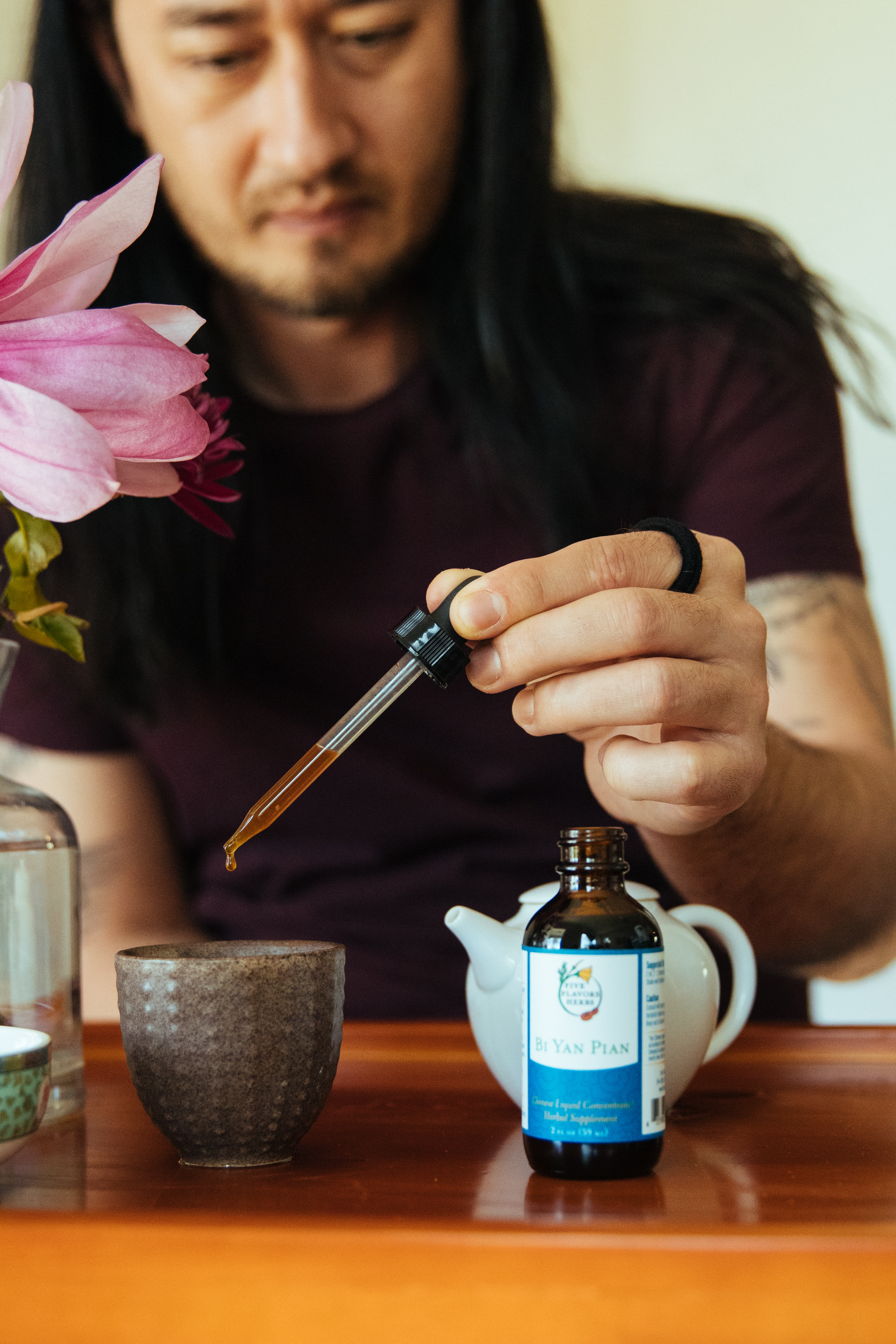 As with most conditions, Traditional Chinese Medicine does not recommend a one-size-fits-all approach to supporting individuals who experience allergies. The diagnostic frameworks in TCM offer useful guidance for zeroing-in on patterns that can assist in both managing allergic symptoms and rebalancing an individual's system to make allergic reaction less likely. Using the TCM diagnosis for guidance, an allergy sufferer can work to rebalance the system with TCM herbal formulas, other practical herbal remedies (like neti pot rinse or inhalation therapy), and other holistic self care practices.

Spleen qi deficiency is an impairment of the overall digestive vitality and results in poor absorption of nutrients. In the five phase theory, Earth, or digestion, is the mother of metal, which corresponds to the Lungs, and imbalances originating in the digestion can lend themselves to impairment of respiratory and immune function. This millennia-old insight is well accepted in Eastern modern medicine, and it is common for food intolerances to be screened for in the allergy identification process, with refined grain and dairy among the top disruptors of digestion that may result in respiratory distress. Elimination diets with the removal of commonly known offending foods can be useful tools for assessing the role in a myriad of chronic conditions. Leaky gut disorders are also increasingly recognized as complicating factors for chronic respiratory conditions. Common TCM herbs for supplementing Spleen qi include ginseng, atractylodes, and licorice and are found in many common formulas such as Gui Pi Tang. 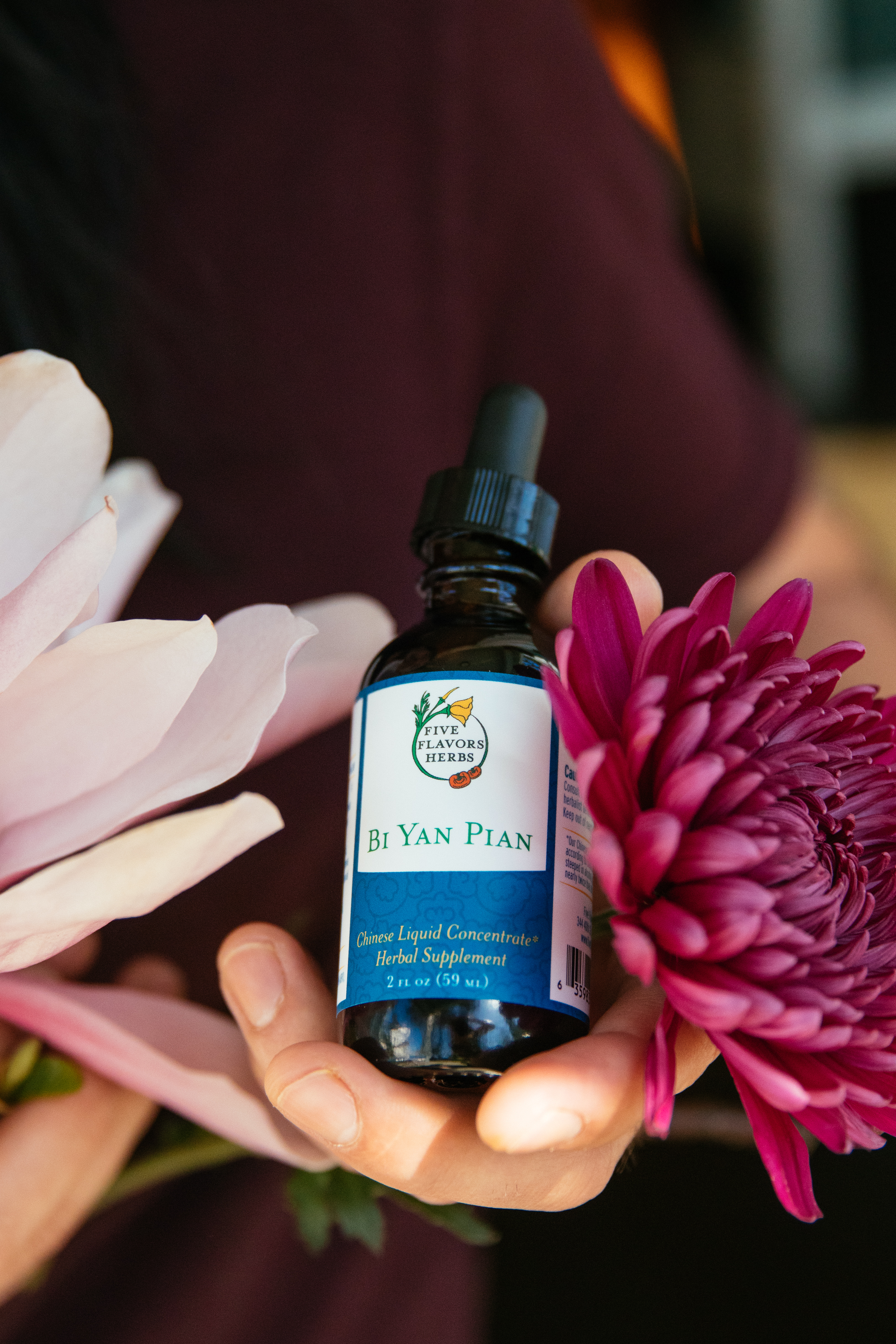 Many of the formulas commonly associated with allergic rhinitis are from the TCM category of “warm acrid formulas that release exterior wind-cold.” Several of these formulas, including Cinnamon Twig Decoction (Gui Zhi Tang), Ephedra Decoction (Ma Huang Tang), and Kudzu Decoction (Ge Gen Tang) were initially documented in the “Discussion of Cold Damage” (Shang Han Lun) and “Essentials from the Golden Cabinet” (Jin Gui Yao Lue) by Zhang Zhong Jing over 2000 years ago and are considered mainstays in herbal practice to this day. Unfortunately, TCM practitioners in the US have lost access to Ephedra sinensis (Ma Huang)—an incredibly valuable herb for a variety of respiratory and immune functions—due to regulatory actions responding to its misuse in the dietary supplements industry as a stimulant.

Xanthium Powder (Cang Er Zi San), another formula in this category, is commonly prepared as a tea pill and combines warming, acrid herbs traditionally used to dry up mucus and cooling herbs used to clear phlegm heat. It also features aromatic magnolia flowers for their ability to unblock the nasal passages and disperse thin mucus. We’ve found this original TCM formula excellent for addressing mucous congestion and underlying system imbalances, but not so great at rapidly relieving acute symptoms like itchy eyes, nose, and throat and irritation. So in our proprietary Clear Passage Tincture congestion formula, we combine classic Cang Er Zi San with select Western herbs to enhance the formula’s efficacy and provide rapid relief of seasonal aggravation. These additions included some of our favorite West Coast native plants, such as ragweed, goldenrod, and yerba santa.

Bi Yan Pian is a widely known TCM patent remedy available in pill and tincture form. It is especially useful when sinus congestion lingers and mucus turns from thin and clear to a thicker yellow due to excess heat. Bi Yan Pian includes similar warming and transforming herbs as the previously mentioned formulas, along with herbs for strongly clearing heat like chrysanthemum, Japanese catnip, forsythia, and platycodon. Licorice and schizandra act as buffers against the drying effects of the other strong herbs to create a balance formula. 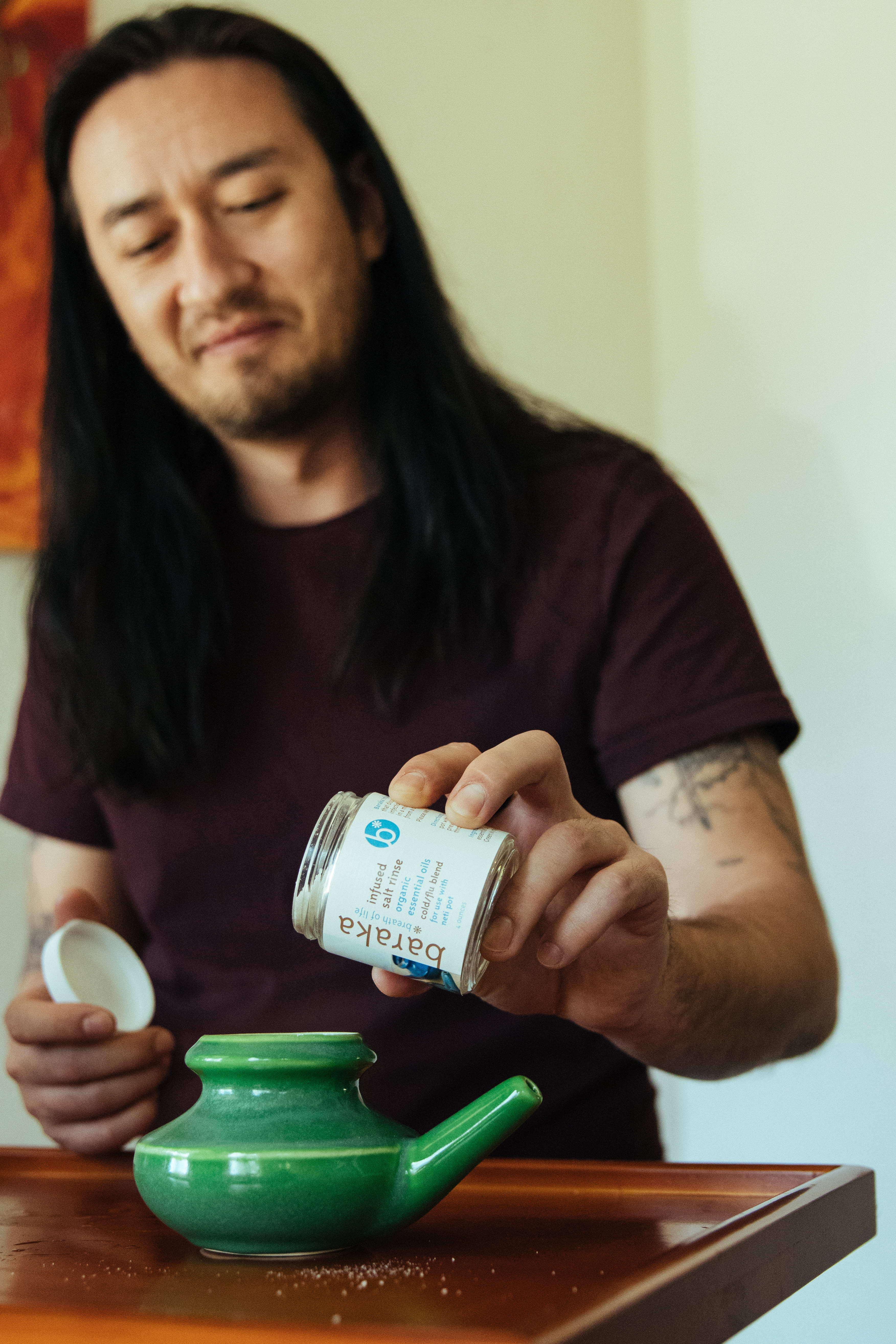 More and more family practitioners, allergists, and ear/nose/throat specialists (otolaryngologists) recommend saline rinse as a first-line preventive and treatment for allergic rhinitis. The process is fairly simple: use a sanitary salt solution to wash out the offending allergen and calm inflamed tissues! A neti pot (an Ayurvedic tool) can make nasal washing easier.

Clinicians seeking longer term, less reactionary solutions may work with patients to identify and eradicate environmental and digestive triggers, either by trial-and-error or through skin or blood tests. Most will also recommend second-generation antihistamines, decongestants, and nasal steroids, as well as eye drops, as initial drug treatments. When symptoms persist, patients may be referred to an allergy or ENT specialist for further testing and advanced treatments like immunotherapy. 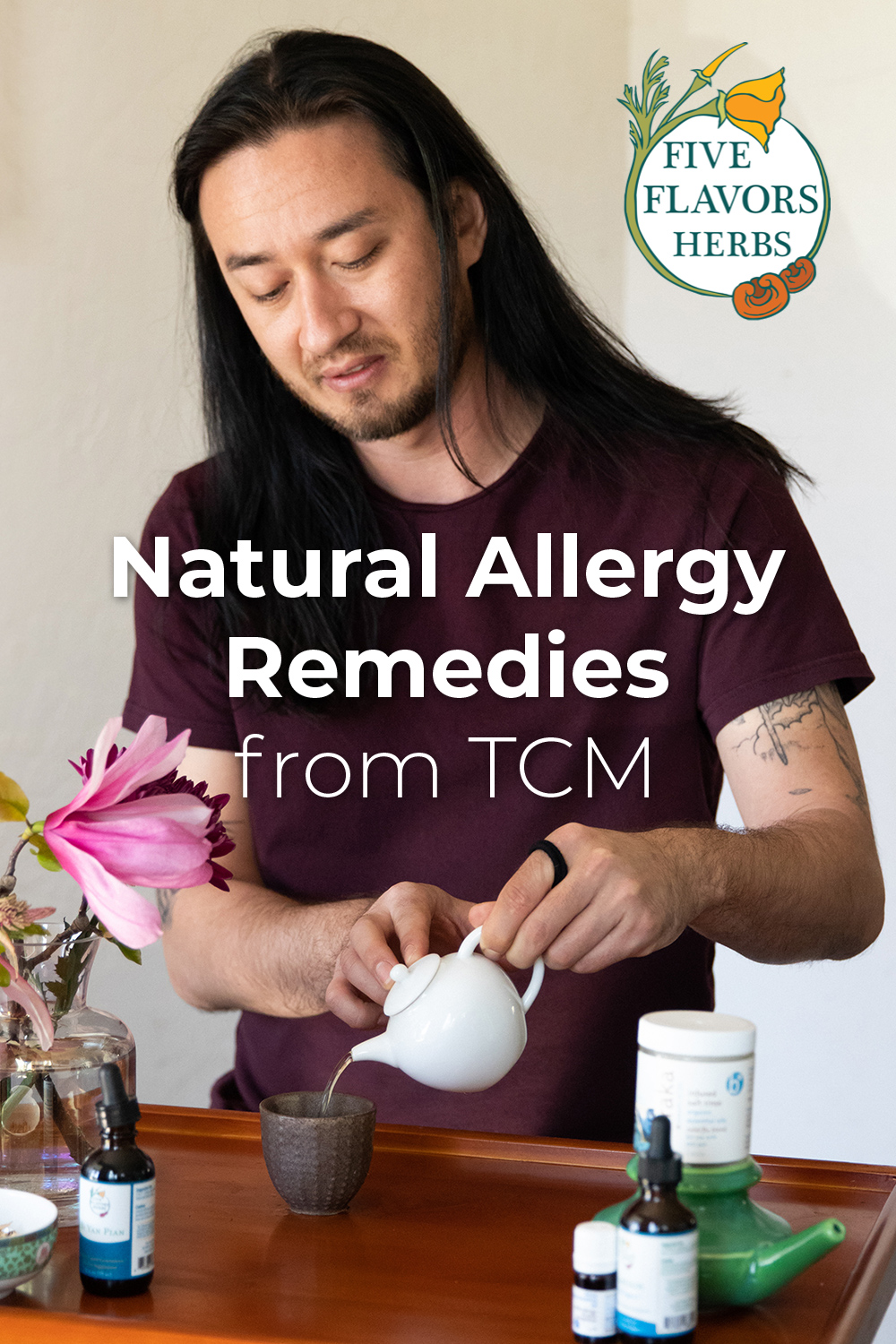 Written by Benjamin Zappin, LAc: Five Flavors Herbs co-founder Benjamin Zappin is one of the Bay Area's most respected and knowledgeable herbalists and a licensed acupuncturist. With over 20 years of experience, Benjamin synthesizes his deep knowledge of Chinese and western herbal medicine with modern medical perspectives to create effective herbal formulas and treat patients. He serves patients through Paeonia Integrative Medicine.