Stinging nettles (Urtica dioica and other species) are among the most ubiquitous and useful medicine, food, and fiber plants found throughout the world. Originally native to Europe, Asia, and northern Africa, nettles have been used for thousands of years for a wide range of purposes. Easy to grow and abundant in many wild places, Urtica spp. offer a diverse toolkit for humans and play an important ecological role as fodder for butterflies and many other creatures. Let’s explore the folkloric, medicinal, and culinary roles of nettle (along with some delicious recipes!).

Urtica is a dynamic genus in the Urticaceae family that includes two primary species: U. dioica (a perennial dioecious herb) and U. urens (an annual weed). Among Urtica dioica, the North American subspecies are actually monoecious, meaning that male and female parts grow on the same plants. U. dioica spreads primarily via the spread of tough yellow rhizomes, although it also produces abundant seeds. It flourishes in moist, nitrogen-rich soils, which means it does quite well in agricultural run-off and roadside areas that may be contaminated with petrochemicals and heavy metals.

Nettle is easy to propagate by dividing pieces of the rhizome, or it can also be planted by seed (though the germination rate is low). It flourishes in rich, irrigated garden soil in partial shade. It has square stems and opposite leaves, and upon emergence looks quite like a plant in the mint family (Lamiaceae). However, the stems and leaves are coated with tiny hairs that contain formic acid, acetic acid, acetylcholine, and other irritants that induce pain, burning, and itching in the skin. Nettles’ sting can be lessened by applying a paste of baking soda to the irritated area, but consider planting nettles in a garden patch away from where kids (and pets) might play to avoid unpleasant encounters! 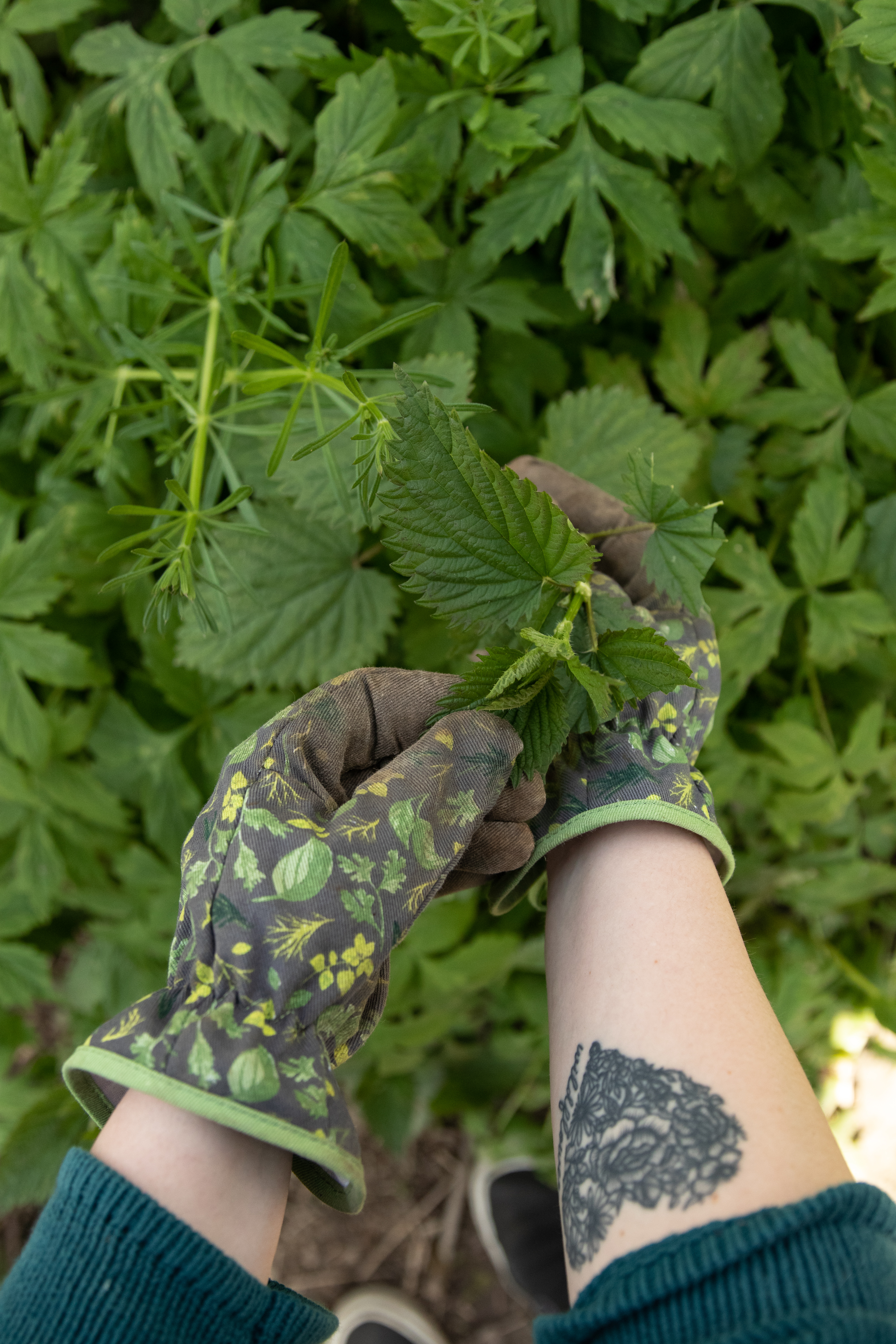 When harvesting nettles, make sure to do so in the mid- to late-spring before the plant goes to flower. Wearing long sleeves, pants, and thick gloves, snip the top foot or so of the stem containing the greenest leaves. If wildcrafting, make sure the soil is not contaminated, and leave plenty for other humans and especially for the insects. To dry the nettles, tie a few stems together in a bundle and hang upside down in a well-ventilated shady area. To process the leaves fresh, strip off the stem and make into a tincture, infused vinegar, or any number of tasty and nutritious recipes (see below!).

Nettles are well entwined in European fairy tales and common sayings dating back to Greco-Roman times. Irish saints were said to have subsisted on nettle teas during fasting. On the other hand, nettles have sometimes been associated with desolation, as they are often found growing in the rich soil of abandoned homesteads. Their sting was also used as a form of self-punishment intended to cool the flames of desire.

In German, the phrase “to sit in nettles” means to get in trouble. In Dutch, “a nettle situation” is a prickly predicament. In French, the saying “don’t push grandma in the nettles” means be careful not to abuse a situation. A famous Aesop fable recounts:

A Boy, stung by a Nettle, ran home crying, to get his mother to blow on the hurt and kiss it. "Son," said the Boy's mother, when she had comforted him, "the next time you come near a Nettle, grasp it firmly, and it will be as soft as silk." The moral is: Whatever you do, do with all your might.

(While Aesop’s fable suggests that the underside of nettle leaves may be less painful, I haven’t found any part of the plant to be soft as silk!) As a child, I preferred the story of the Six Swans (published by the Brothers Grimm in 1812), which recounts the story of a girl who must weave six tunics out of nettle fibers to turn her brothers from swans back into humans. I imagined her sitting for six years in silence, her hands burning with nettle stings, as she worked tirelessly to save her family. 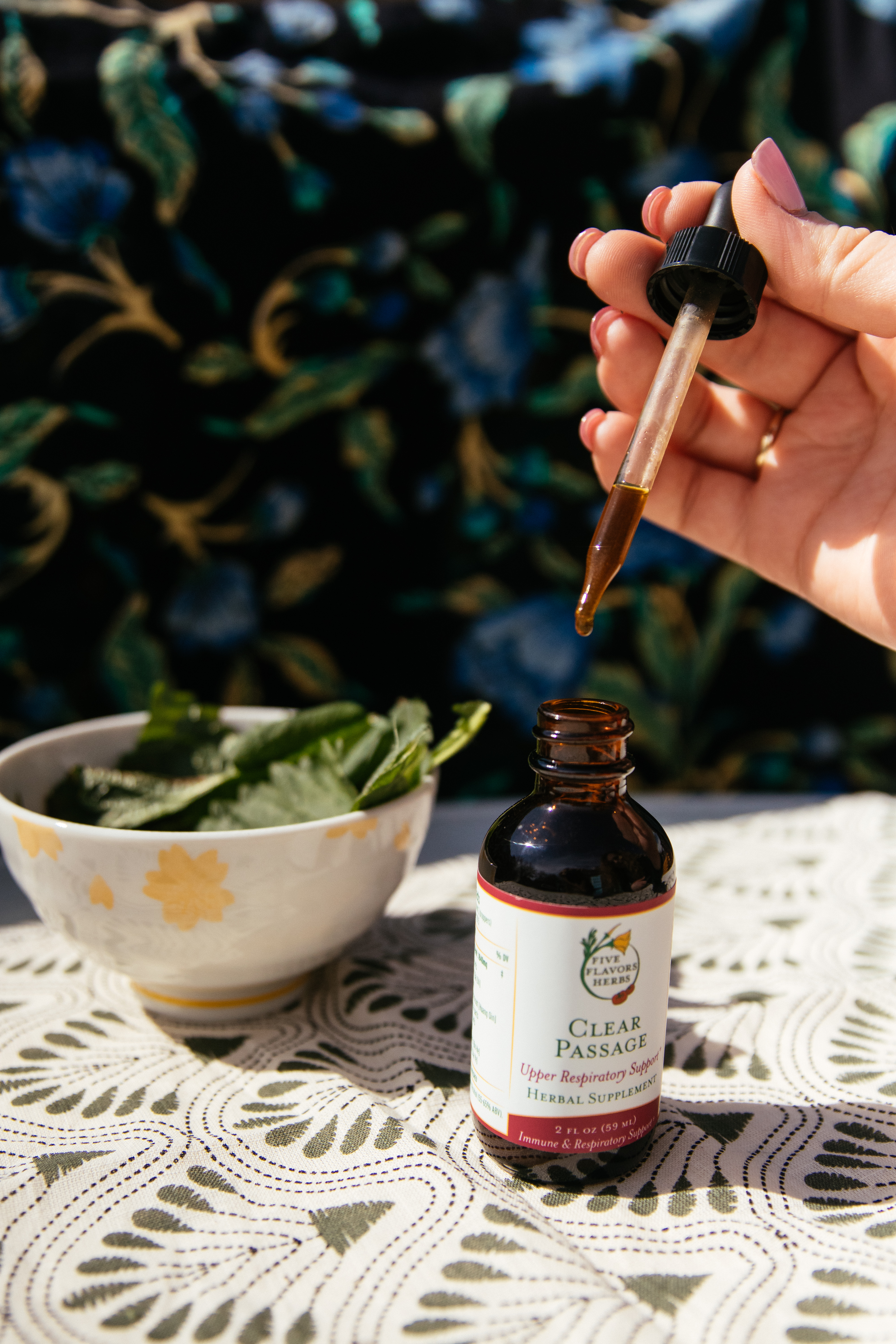 Nettle leaf infusion has traditionally been used across the globe as a diuretic, blood tonic, astringent, uterine tonic, inflammation mitigator, and for alleviating seasonal allergy symptoms.

Michael Moore heralded nettle tea as an excellent diuretic useful in leg swelling, premenstrual bloating, gout, and inflamed skin conditions “...particularly when the problem is aggravated by anxieties, freak outs, or really bad food (and combinations thereof).” Moore also recommended nettle internally for bleeding, whether due to irritation in the gastrointestinal tract or excessive uterine bleeding—which coincides with its reputation as a uterine tonic. Many herbalists combine nettle with raspberry leaf as a nutritive, womb-strengthening brew during pregnancy. Post-partum, nettle also has a reputation for building blood and promoting lactation.

Nettle leaf has a reputation for reducing symptoms associated with seasonal allergies, likely through the inhibition of the inflammatory pathways associated with hayfever. A trial of 69 people treated with 600 mg of freeze-dried nettle leaf showed that over half reported significant relief from seasonal allergy symptoms. Nettle leaf combines well with other herbs that reduce sinus irritation, such as ambrosia, goldenrod, yerba santa, and yarrow (all found in our Clear Passage Tincture formula) or the Asian medicinals found in the traditional Chinese formula Bi Yan Pian.

The German Commission E approves nettle leaf as a supportive therapy for lower urinary tract infections and the prevention of kidney stones. Contemporary research and practice suggests that nettle root may promote a healthy prostate and reduce lower urinary tract symptoms associated with prostatic enlargement. Nettle root compounds may interfere with the effects of testosterone and inflammation on the prostate, thus combatting enlargement and urinary obstruction. Multiple placebo-controlled trials focused on prostate health have demonstrated safety and efficacy of products including nettle root (with or without saw palmetto fruit, or Pygeum africanum, bark) including non-inferiority to alpha-1 antagonists (tamsulosin) and aromatase inhibitors (finasteride).

Topically, the stinging action of nettle has long been used to address discomfort in the joints. Roman soldiers were said to have flagellated themselves with fresh nettles to shoo away pain, and in Latin America, “urticarse” (to hit oneself with nettle) is a traditional remedy for arthritis. Topical creams using nettle leaf extract may provide a less painful yet still beneficial treatment for joint pain.

With a flavor similar to spinach but nuttier, slightly spicy undertones and a richer texture, nettles are one of my favorite spring vegetables. As a bonus, nettle is the original superfood! Rich in protein (25% by dry weight), chlorophyll, iron, vitamin A, C, potassium, manganese, and calcium, nettle makes a superb fresh vegetable, and is also wonderful as a powder for green smoothies and toppings.

Make sure to eat nettles before they go to flower or seed, or the leaves become gritty and may irritate the urinary tract. Use gloves to handle nettles during preparation, and blanch before using in recipes! 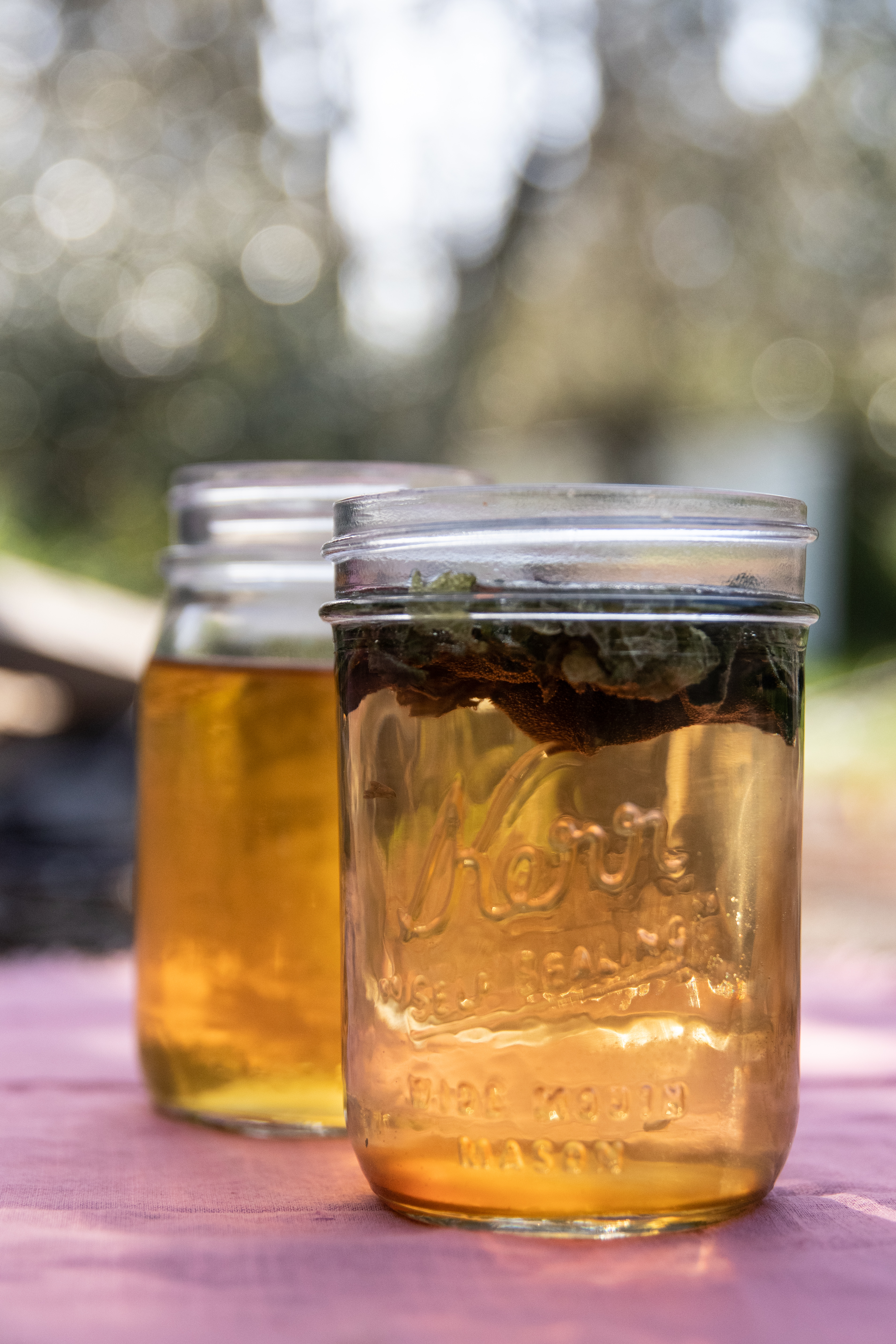 The most simple of herbal preparations involves steeping plant material in hot water to create an infusion (or “tea”). Infusions are an excellent way to enjoy nettle’s nutritional benefits, and they can be surprisingly refreshing as well! For a brighter flavor, combine with mint, lemon balm, or lemon verbena, or for a warmer and more stimulating brew, add a few sprigs of rosemary or thyme. Note that nettle tea has a rapid diuretic effect, so avoid consuming before bed if you want a good night’s rest. For the same reason, be cautious if you take medications for blood pressure or water retention, which may cause additive effects when combined with nettle infusion.

An oxymel is a shelf-stable honey and vinegar herbal infusion that has been part of folk medicine for centuries (and likely longer). Enjoy a spoonful of this nettle oxymel straight or mixed into tea to ward off complaints during pollen season, or when you need an extra dose of nutritive support. For more on the benefits of oxymels, Lung Support Oxymel post!

This fortifying syrup nourishes the blood, skin, and hair. It is great to use during times of stress, after menstruation or a prolonged illness, while breastfeeding, or any time the body needs an extra boost (for a ready-made version, try the Strong Woman Syrup available in our shop). Talk to your doctor about this formula if you have excess iron stores, liver or kidney disease, coagulation problems, if you take blood-thinners, or if you are pregnant. 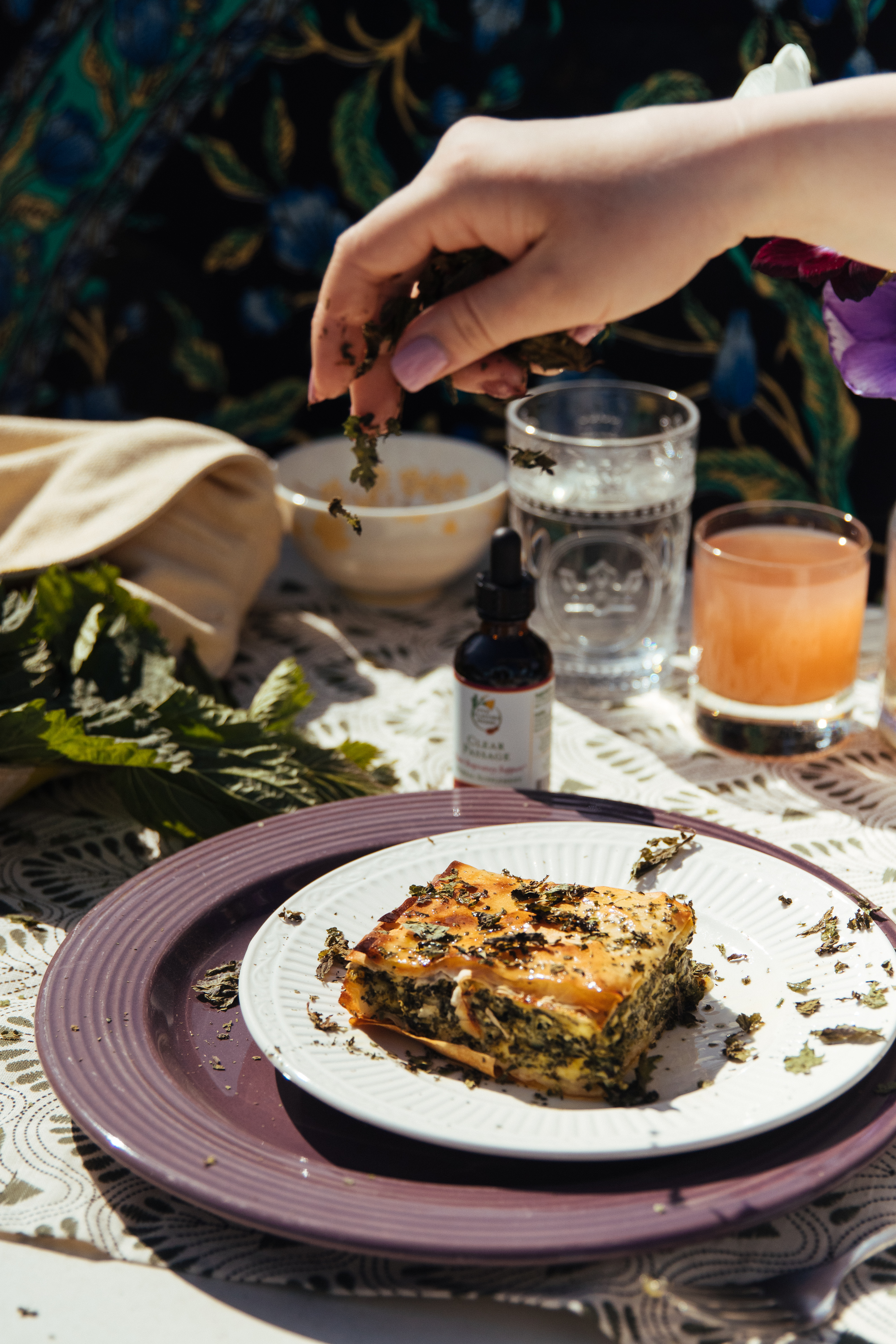 A local twist on a Greek favorite, this dish never ceases to dazzle our taste buds!

Gomasio is a traditional Japanese topping made by toasting sesame seeds with sea salt, then grinding coarsely. As a child, this was one of my favorite kitchen chores. I loved the nutty aroma of the sesame seeds and the texture of the wooden mallet grinding around the suribachi (the Japanese version of a mortar and pestle). Powdered nettles, sea vegetables, and aromatic herbs give an added nutritive kick to this classic recipe that tastes great on top of rice, soba noodles, roasted vegetables, or a cup of hot bone broth or vegan broth.

Nettles make a good substitute for or addition to spinach (saag) or Swiss chard in almost any dish. This tasty Indian-inspired recipe creates a creamy vegetable dish that goes well with dahl (lentil soup) and rice or chapati.

Written by Ingrid Bauer, MD, MS: With experience that bridges Western and Eastern medicine, Ingrid brings rigorous scientific knowledge to Five Flavors Herbs. A graduate of the UC Berkeley/UCSF Joint Medical Program and the American School of Herbalism in Santa Cruz, CA, Ingrid integrates plant-based medicine into mainstream healthcare. She is passionate about bringing holistic care to people from all walks of life. 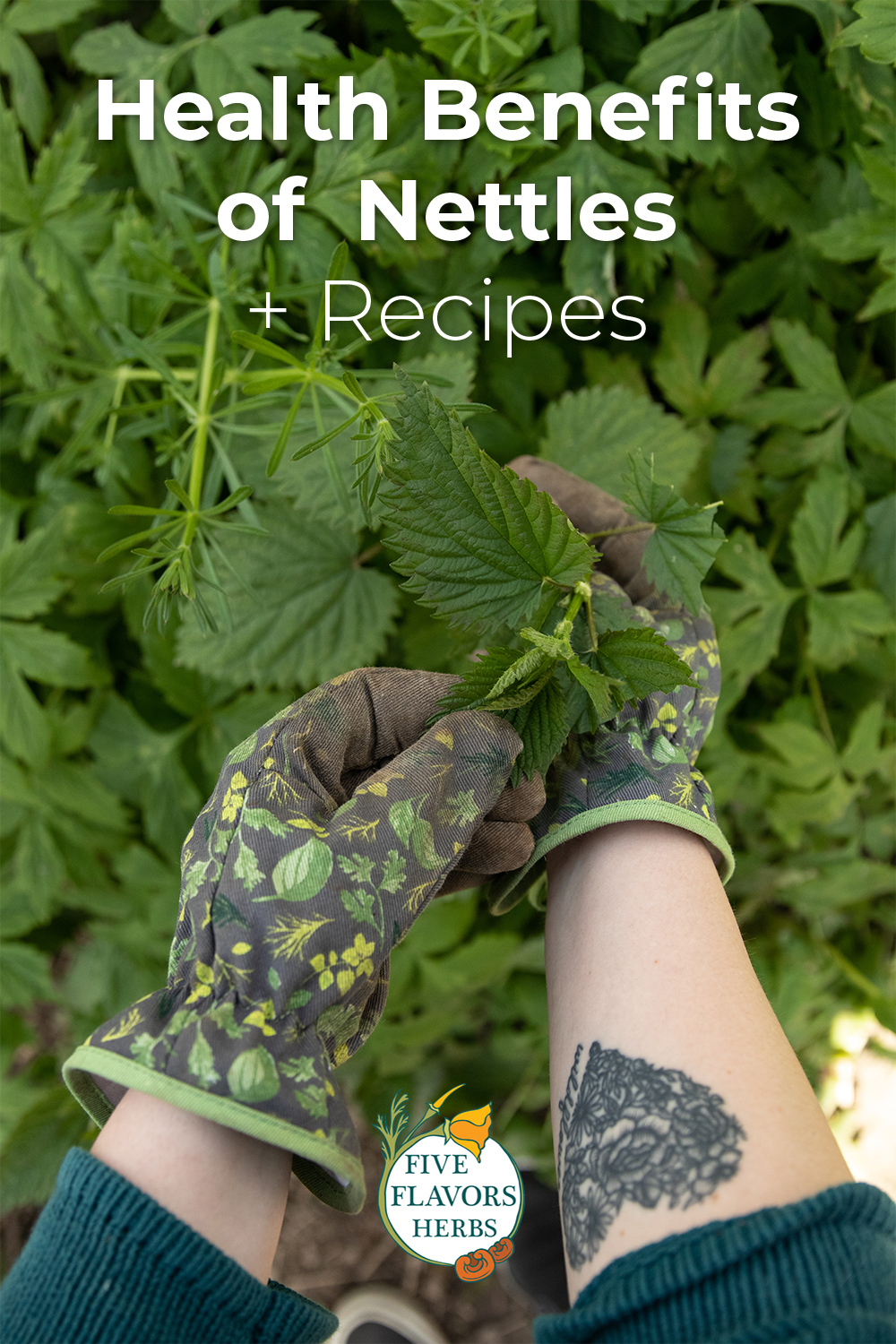